“I killed me some gophers/moles/voles, whatever the hell they are . . .  I started digging it out again and this little pink snout came out pushing more dirt.  I quickly lit the bomb and shoved it right in his face, quickly covered the hole and ran down, lit the other bomb.  Let’s hope it worked but I think I probably have a whole assortment of critters down there.”

It’s good to have a project to focus on right now.  A lot of my friends seem to be into bread baking.  Others are at it with online exercise or miscellaneous types of remote learning.  Several are volunteering at food banks or various COVID related endeavors.  A few have even figured out Tik Tok. My friend above is channeling her monotony into critter extermination.  I felt a bit sad for the little pink snout being in the wrong place at the wrong time, but no judgement for my friend, who is actually a very nice person.  We must take our little victories where we can in these troubled times.

I haven’t been bored enough to send people threatening emails.  I haven’t been bored at all actually.  I spend my days monitoring the equilibrium in my household and this takes copious amounts of emotional time and energy.  Our family dynamic, on an average day, ranges anywhere between The Brady Bunch and Married . . . with Children. I’m either channeling Carol Brady’s sunny optimism or Peg Bundy’s alcohol-infused maternal neglect and shallowness.  It’s not just the virus. It’s the whole state of things in our country. I think even Carol Brady would be tossing one back just about now.

It’s a unique thing to parent an adult child. I like that we can share a glass of wine. I like that I don’t have to curb my language. I like that I can tell them the truth and have real conversations. I may be an outlier in my demographic, but I’m relieved that their childhoods are over. I spent most of it holding my breath, hoping they would turn out okay.  They turned out better than okay, but the world I’ve forced them into is horrid. My only real job left as their parent is to reassure them that everything will be okay.  Frankly, I’m having a hard time with that one lately.

Since that awful day in November 2016, I’ve been waiting for the grown-ups to tell me everything is going to be okay. The President has either fired all the grown-ups or anyone who dares him to do the right thing. There is an entire news channel dedicated to promoting him – even when he doesn’t tell the truth. If polls mean anything, it seems around a third of the country take this as gospel. The chunk of government whose job it is to keep a check on presidential power, has effectively abdicated its responsibility.  Our free press is routinely threatened by the President. The actions of our Attorney General would seem to suggest that he is no longer independent. Who is left to protect us? Who is left to make it all okay?

I have a close friend who is surrounded by family that not only disagrees with her politically, but thinks the President is doing a great job as a leader.  I asked her how she can still have a real relationship with these people.  Here was her answer: “I turn off a part of my brain when I’m with them”.  So, kids, that’s the answer I guess to living in today’s America.  Turn off your brain.  It is so not okay.

Girls trip with my daughter. Unseasonably warm January weekend. Manhattan. Upper East Side. The Mark Hotel. Strolling in Central Park. Browsing in Bloomingdales. The Strand Bookstore. Moulin Rouge on Broadway. Italian at Scalinatella, Asian Fusion at Tao, French at Le Coucou, sushi at Nobu. “Should we get another bottle?” Pizza. Bagels. Sunday brunch with my beloved New Jersey family. My cousin’s five and eight-year-old daughters singing Lizzo songs.  Forgive me, I just needed a second to ruminate in a favorite recent memory, my last travel event – for this year and the foreseeable future.  I decided to be “present” that weekend and took no pictures.  I won’t make that mistake again.

Someone in our neighborhood decided to paint their house black and another neighbor is not too pleased about it. I know this because the guy called my husband to complain about it.  Jim is on our Homeowners Association (HOA) board, so he periodically fields complaints from well-meaning neighbors. In this case, the aggrieved neighbor wanted Jim to determine if the color was in violation and if so, take the necessary action.

I think the man is greatly overestimating the power of an HOA, or of my husband for that matter.  Jim does have a gold badge lying around somewhere from his 30 years with the Treasury Department.  No firearms though and plus, he’s more of a lover than a fighter.  Also, he’s been in ten weeks of lockdown living with a wife with dual personalities (Carol Brady/Peg Bundy), and loving daughters offering ongoing helpful feedback about: his diet, wardrobe, news sources, personality, diet, communication skills, diet, exercise routine, and diet.  So, he’s a bit worn down.

We checked out the offending house on our walk today. It’s really more charcoal colored and personally, I like it. Assuming they’re a good neighbor, maintaining their home, and not flying a confederate flag, I don’t much understand why anyone would complain about the color of a house.  Particularly at this moment in time when there are much bigger issues to worry ourselves about. Maybe that’s the point though. Focus on what we think we can control. Like the critters in our yards.

Speaking of things that we can control; we have goats in the ‘hood!  For the second consecutive year, hubby has facilitated a herd of goats to take care of brush clearing, thus greatly improving our chances in the event of fire.  There are 400 of them and they will be slowly making their way through our neighborhood over the next three weeks.  I wish they could stay forever.  Just seeing them makes my heart, and my brain, very happy. 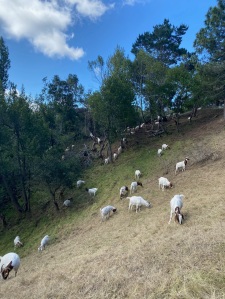 “Any writer worth his salt writes to please himself…It’s a self-exploratory operation that is endless. An exorcism of not necessarily his demon, but of his divine discontent.”